There are 3 types of tokens used to authenticate with the Moonsense API. These tokens are always tied to a specific application and developers can use the Moonsense Console to generate two of the three tokens listed below, namely the Public Token and the Secret Token.

This token is the most restrictive of the three tokens. This token can be generated by accessing a specific application in the Moonsense Console. This token is provided to the Moonsense API as a part of an upgrade process to generate an App Access Token. Developers can also perform this upgrade using their own custom endpoint implementation(more on that later). When using a Public Token, developers can also provide an optional user identification to associate the token with a user performing the request.

As the name suggests, this is the primary token that is used by most Moonsense API endpoints. These tokens are usually short lived and need to be regenerated on expiry. These tokens are only available via an endpoint upgrade process and cannot be generated via the Moonsense Console. All SDKs provide a default implementation that performs this upgrade using the Public Token provided via the initialization routine. These tokens have ingest permissions that allow the caller to write to the Moonsense backend. By default the App Access Token generated by the SDK expire every 24 hours. In most cases, developers do not have to concern themselves with this nuance as the SDK does the work of requesting for a new token on expiry. However, in the case of a custom implementation it is the responsibility of the developer to request for a new App Access Token whenever the old one expires.

This is the most permissive of the three tokens. When generating tokens via the Moonsense Console, the Secret Token is only available at the time of creation. It is therefore the responsibility of the developer to hold on to this token past this point(the Public Token however can be retrieved at any point post creation). The Secret Token is usually used as a part of a consumption flow allowing the developer to access all the data that has been reported to an application via the ingest mechanism. These tokens do not provide any user identification and therefore should not be used from an ingest standpoint.

Creating tokens via the Console

Once logged in to the Moonsense Console. Click on the Apps tab in the left panel to view all Apps available to the developer.

Next, select the app you want to generate tokens for and click the Create token button.

Provide a name for the token. 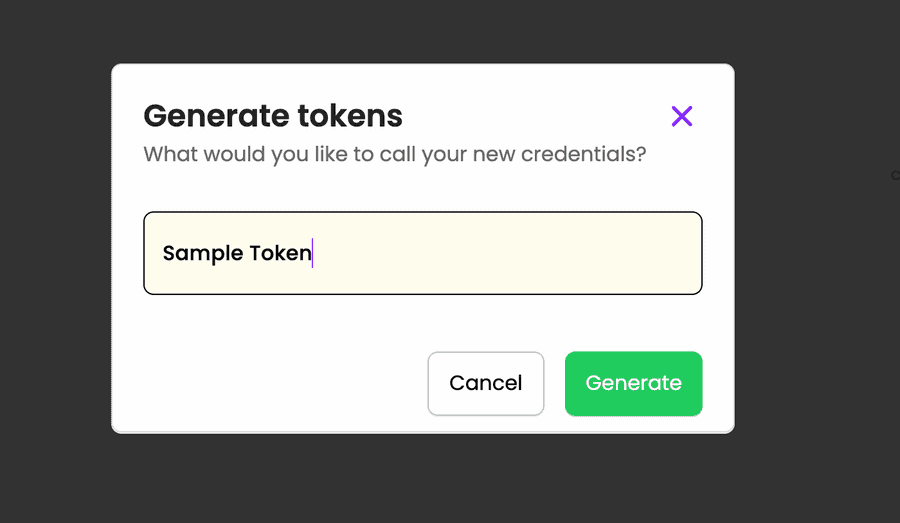 And finally acknowledge that you have copied over the tokens. 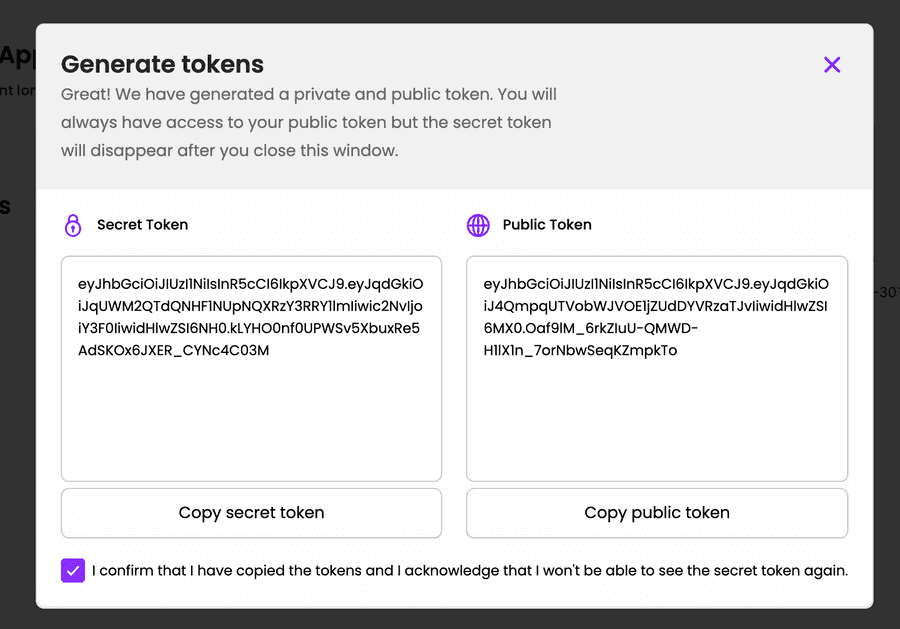 The SDK automatically handles the process of upgrading your Public Token into an App Access Token using the value for the Public Token that is passed into the SDK initialization process. This App Access Token is then used to make authenticated requests to the Moonsense API. By default, no user information is associated with the token and the userId and clientUserId associated with the bundles will be blank.

There are two methods to associate a User with the Session being tracked. Each method is specified in a separate field to make it easy to distinguish which method was used. The first field is clientUserId. The second is userId. They have separate levels of complexity and meaning, which are described in the following sections.

Once implemented, the Bundles will include a userId field. This userId is definitively associated with the user specified and has passed authentication within your own backend implementation.

Implementing a tokenUpgradeHandler is necessary to tell the SDK how to fetch a token from your Custom Backend Token Upgrade endpoint. It is required if you want your backend to create a token with a validated userId. This handler is then passed to the Moonsense SDK on initialization. Note that only the Web SDK allows you to implement your own Custom Token Upgrade Handler. Support for Android and iOS are coming shortly.

The handler setup will vary slightly by platform but all platforms follow the same approach.

The handler will be passed the publicToken that is given to the Moonsense SDK on initialization. The handler is then expected to return a appAccessToken to the Moonsense SDK. The expectation inside this handler is that your application will use any state information you have to communicate with your own Custom Backend Token Upgrade endpoint to fetch the appAccessToken.

Implementing a Custom Backend Token Upgrade provides the most assured method of associating a specific user with a session as it requires authentication against your own backend. This method is not required to use the SDK.

The goal is to obtain an App Access Token that contains a validated userId that can then be used by the SDK on Moonsense API requests. This is accomplished by adding a token request method within your own servers to fetch the token. Requests to this method will perform the following:

Learn more about Moonsense solutions and how they can help your team!

Ready to get started?

Focus on building what matters most with Moonsense data solutions.

Join our community and receive news of the latest trends in behavioral and sensor-based data.